It’s funny… I’m almost surprised to say I feel great! Especially because I ran the Steveston Icebreaker 8km race today, after running 22km yesterday, and at the end of my highest mileage week thus far in my 30-week schedule. I’d wanted to hit 105km this week, and I easily hit 108km.

You might think I’m crazy to say “easily” hit 108km. But when you get up every morning and start the day with a run that you barely realize you actually did cause you’re still pretty much half asleep – it’s actually easier than you think. Okay, it certainly helps that hubby is also sleep-running beside me. And I only had to run twice per day 3 times this week to reach that mileage.

So oddly enough, although it did feel like a good amount of running (and goodness, so much laundry!!) – it didn’t really feel that challenging overall.

Now – that’s not to say there weren’t any challenging moments over the course of the week. Let’s start with today – the race. Hubby and I both knew going into it that there was no way he or I could actually truly race or expect a PB/PR. Not after a regular long run the day before. Not with the most mileage to date this year in our legs. And not after taking 2½ months off and only having had jumped back into training 5 weeks ago.

So why bother with a race? Simple. I absolutely LOVE races. I love the energy, the excitement and the running hard alongside so many others who are also running hard. I walk away motivated, either because I set a new PB and want to train harder to PB again, or because I did not set a PB and want to train harder in order to do so next time. Clearly, I knew this race was going to be a case of the latter – and so it was. 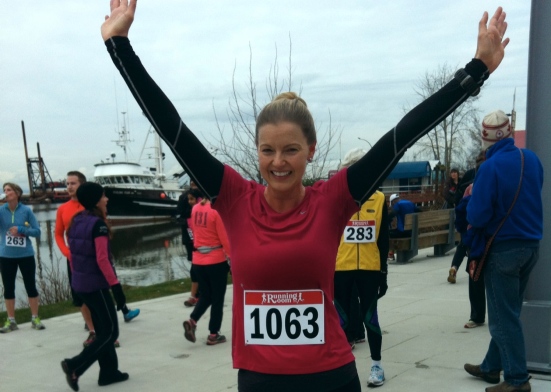 It was meant to be a symbolic kick-start to our racing season. Get us in the mood for racing. And oh boy, did it ever! I don’t regret using the race as a training run – but I will admit I’m tempted to find another 8k race to run where I think I could achieve a PB.

That’s the competitive side of me talking of course. I had a really great time out there! The plan was to run it at M (marathon) pace – and that is exactly what I did (projected M pace for Eugene that is – which is kinda 15 seconds faster per km than any other marathon I’ve run and today put that fact into very clear perspective). If nothing else, today showed me exactly what I need to be ready for come July 27th.

Other challenging moments… While I was pleased with how good my double runs felt (8km in the morning, 14km in the afternoon), what didn’t feel so good was Wednesday nights’ hill workout! That kicked my butt so hard (but then, hills always do).

Thursday morning, less than 10 hours post-hill workout, was also pretty challenging. Thursday evening was MUCH better, as was Friday morning.

Saturday I gave a talk out in White Rock to an awesome group of runners and then went running with them. I was clearly worried about putting in too much mileage (anything more than 20-22km)… But in the end there were enough people in the group I was running with to find 3 guys who were cutting off at an earlier point to make the total mileage that of 22km (instead of the 26km the majority of the group was doing). It was great fun to run with such a motivated group, put a face to a few names, and run a totally new route – they took me along a beautiful trail and down along a river (marsh?). It was so scenic, calm and pretty.

Which brings me back to today and my race. I love running, but I really love racing. I won’t deny racing is freaking hard. In fact, it totally hurts – you experience complete discomfort. But now more than ever, I am so very much looking forward to the next 25 weeks of training and the string of races that will ultimately bring me to my Eugene marathon and ready to run a sub-3:21.

PS. I was super excited this week to receive my new Eat 2 Run logo from my designer!

Now… Would you not agree that my silly pose after my race today actually kind of mimics my new running dude icon? Haha 🙂