Make the best of it… No matter what. That’s what was going through my head as I jogged towards the start line, hugging my warm-up pants and sweater in my sweats bag to my chest in a desperate attempt to keep them dry. A useless attempt really, as the heavens let loose torrents of rain that whipped into me with wind speeds of up to 50km per hour. I’d left my husband and friends on the bus trying to stay warm and dry, in my last minute need to run to visit the porta-potty nirvana – an impressive and famed sight to behold each year at the California International Marathon (CIM). No wait lines – just about the only positive I could currently find at that moment.

With my head tucked down trying to avoid the rain and given how dark it was, I nearly ran headlong into other racers jogging around. People were dashing around trying to get from point A to point B as quickly as possible. Hundreds huddled under the gas station covering a few hundred metres to the right of me. Dropping my sweats bag off, I completed my one and only stride after what was probably a half km warm-up. All proper race prep had been tossed out the window when my husband had come back  after walking Sunshine earlier that morning and announced the wind was so strong it nearly swept him off his feet three times. I’d been awake since 1:30am listening to the howling wind and rain pelting on the hotel window so he was only confirming what I already knew was going on out there.

I found the 3:30 pace bunny and positioned myself just behind him. The gun went off. The storm crescendoed, gaining momentum and energy. Filled with my own nervous energy, I threw off my old lulu sweater to the ditch and stayed behind my pace bunny. As with just about all my marathons the first 10km flew by relatively easily, even with the stormy weather. But then, just over an hour into the race, the storm peaked. I turned the corner to head south at about the 10km mark and smack into the strong gusting wind, which smacked me back with huge buckets of water. I fought it hard. But there on that stretch, before I’d even reached the halfway mark, I lost. Maybe I should not have tried to keep the 3:30 pace given the winds and rain. Maybe this, maybe that. Certainly one of the reasons I’d chosen CIM was for the sunny beautiful racing conditions I’d expected to find there. They were nowhere to be found.

The other reason I’d chosen to run this race was for its flat, fast and net downhill course.The course is indeed net downhill. It begins at 366 ft and finishes at 26 ft. However what I’d lacked taking into consideration were the rolling hills. At no point during the first half did I ever feel that I was running on a flat surface (because I wasn’t). I was either slightly going up or slightly going down. And boy oh boy, did the rolling hills ever beat the crap out of my legs. At about 12km a huge gust of wind snapped the 3:30 sign off my pace bunnies stick. It flew by my face and landed somewhere behind me. Within the next km, I began to trail the 3:30 group, and eventually lost them altogether. 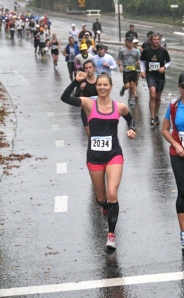 Being passed by runners before even hitting the halfway mark is disheartening to say the least. I resigned myself to simply do the best I could and leave everything I had on the course. I pushed onward. It was somewhere in the 28km mark that I heard my name being called (maybe sooner, maybe later – really, this was one race where I missed seeing many race markers – probably because most of them were blown over on the side of the road). Glancing back, my friend LA was catching me. So was the 3:40 pace group. She said to me, let’s do this together. I told her to please go on without me as my legs were in the middle of blowing up and I didn’t want my exploding quadriceps to disturb her race.

I guess my legs didn’t totally give out on me after all . They held on enough to prevent the 3:45 bunny from passing me. They didn’t mind the last 10km or so of pretty darn flat road to race on. I’m grateful to them for doing everything they did do for me because I have to confess – I didn’t give them every bit of training they needed to properly run that race. About 4 weeks before race day, I lost my momentum. Lost my drive, my energy, and my will. By the time I regained it all I’d already missed a few key workouts and some precious mileage. 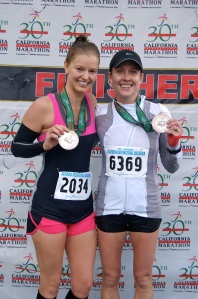 Me & LA – finished within seconds of each other!

I’ll tell you why I burnt out. Or my hypothesis anyway. I was on the edge of overtraining. Exhausted. For a few reasons, but one of the ones I had the most control over was that I was running my easy pace runs too quickly – never allowing myself to truly recover from the previous workout. In a way I was lucky – some people get sick or injured if they don’t allow their bodies the chance to recover. You’d think I’d have known this already (well, actually, I did – I just failed to heed my own advice). Run the easy runs at an easy pace. Call it slow if you will. In order to become a faster runner you need to slow down before you speed up. I can’t force my easy pace. Ever.

The lessons continue. I promise myself to truly learn them. My legs carried me to the finish line with a final chip time of 3:42:21. I believe when you’re trained, you’re trained. Weather can’t take away your training. And this just wasn’t my race race to run a sub-3:30. But oddly enough I was very at peace, even happy, with my performance. It’s not everyday one gets to race the California International Marathon and I took it all in and made the best of it – enjoying some parts more than the rest (please may my next marathon not have torrential downpours and gusting winds). For the record, as I crossed the finish line the clouds broke, the sun came out and the rest of the day was gorgeous California weather. Ha.

4 thoughts on “Making the Best of It: CIM Race Report”